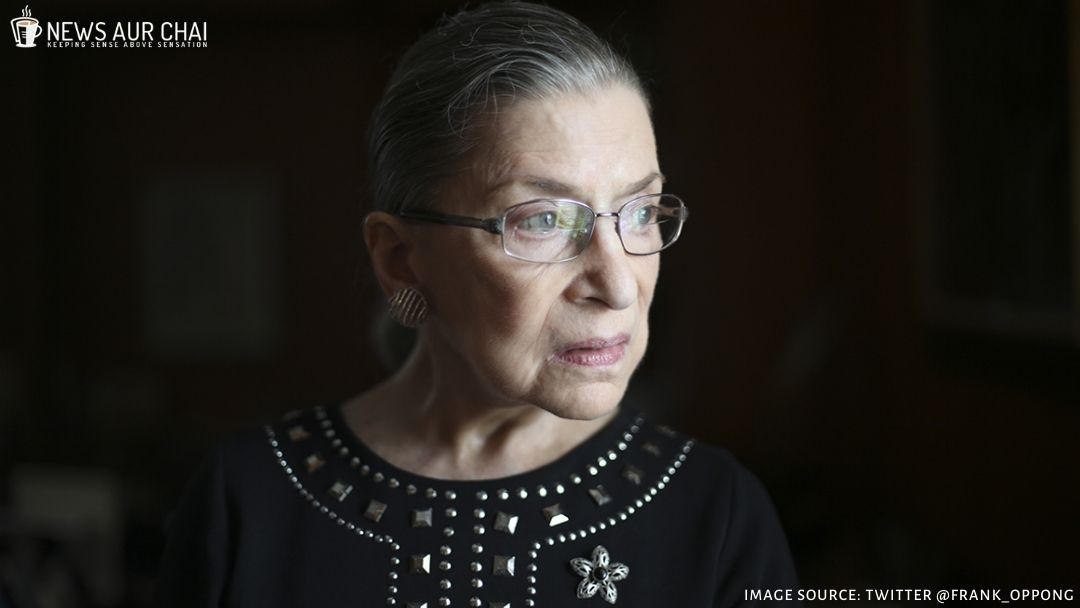 “When I’m sometimes asked ‘When will there be enough women on the Supreme Court?’ and my answer is: ‘When there are nine.’ People are shocked. But there’d been nine men, and nobody’s ever raised a question about that.” – Ruth Bader Ginsburg.

On Friday, Americans gathered to mourn the demise of a national icon, Second US female Justice, Ruth Bader Ginsburg in front of US supreme court. At 87, she took her last breath in Washington, fighting metastatic cancer. Despite being diagnosed with cancer as early as in 1999, she fought bravely for health instead for the liberties of American people.

The mountain achievements came from life and legacy full of struggle and sacrifice. They say “strongest steel is forged by the fires of hell.” Indeed true, Ruth, a five feet small woman, had a resilience of steel.

She was born to an immigrant Jewish family in 1933, raised by single father as her mother Cecelia, a driving force to her, died before Ruth completed her high school. She met her love, Martin, at Cornell University, whom she loved very much till his last breath in 2010, ending a romance of six-decades.

In 1950, she was demoted from her job in social security office on account of pregnancy, a prevalent practice during the era.

She later got selected at Harvard, one of the nine women of her class in 1959. Despite this, her tenured Harvard professor thought that giving women a seat is just a waste of time. Her husband was diagnosed with cancer at the same time, leaving her with a 3-year-old child, a fairly sick husband, the law review, classes to attend. Staying awake late and sacrificing sleep is how she becomes an academic star of Harvard Law.

Later, shifting to Columbia with her husband, she became the topper of Columbian Law Class in 1959, thus making her the first woman in history to work at both colleges’ law reviews. Perhaps the saddest part of this achieving story is “Not a law firm in the entire city of New York would employ me, I was struck down for being Jewish, woman and a mother” said Ruth.

The period of 1960s-170s was fuelled with civil right movements in the USA, woman coming out of the cave to support each other, asking for constitutionally protected gender-rights to be on ground reality. Ruth was one such woman, who ended up being a law professor at Rutgers Law School and teaching some of the first female law students.

With fortune favouring the brave, she got her first case “Reed vs Reed” before Supreme Court in 1971 on the matter of man-woman equality in real estate executor as men were preferred over women. Her first legal victory comes with this case where the US Supreme Court in its first, nullified gender-biased law.

She took up several male cases, such as how social security law benefited only widows and not widowers and indicated how gender-discriminatory laws hurt everyone and not just women in general.

Ruth was nominated to the United States Court of Appeals for the District of Columbia in 1980, thus kicking off her career in the jurisdiction. After litigating six crucial cases in the Supreme Court, Bill Clinton, former US President nominated Ruth to the Supreme Court in 1993, making her, the Second Female Jurist in US history. Clinton said “Ruth Bader Ginsburg does not need a seat on the Supreme Court to earn her place in the American history books. She has already done that.”

Her journey as Jurist saw striking down Virginia’s Military Institute law in 1996 which had men-only admission policy. She said “presumptively invalid … a law or official policy that denies to women, simply because they are women, equal opportunity to aspire, achieve, participate in, and contribute to society, based upon what they can do.”

Ruth’s jurisdiction flourished with the case of rights of people with disabilities, wherein she ruled that the states are required to place persons with mental disabilities in community settings rather than forcing in, in institutions.

Dissent: a disapproving expression against the majority. Ruth never shied away from expressing her opinions, even, when it stood against the majority in Court. Dissent came with the renowned case of George W Bush in 2002, the nine benched Court split up in 5-4, holding the Florida Supreme Court’s attempt to allow a recount of votes in the 2000 Presidential election, whereby, Ruth being a liberal, supported recount following voting discrepancies in Florida. She signed off with “I dissent” – thus, removing the adverb “respectfully “which was always used along.

Ruth’s following dissents gave her the adjective “Notorious” on twitter to trend by comparing with late rapper The Notorious BIG. The most crucial dissent being the Voting Rights Act in 2013, wherein Court decided to remove a significant part of the Voting Rights Act Of 1965 which came from the achievement of the Civil Rights Movement in the 1960s.

She played a vital part in the judgment of legalising same-sex marriage in all 50 US states and also upholding the affordable health care act, which allows subsidies to Americans who purchase health care.

On her adjective, she commented “It was beyond my wildest imagination that I would one day become the Notorious RBG, “I am now 86 years old, and yet people of all ages want to take their picture with me.” It shows the zeal towards life by Ruth, who considered to be a humorous charming little lady.

In recent years, she voiced against total abortion ban in the Alabama state of USA and has consistently toiled for women’s abortion rights since 1976’s Roe vs Wade case, which legalised abortion in the USA.

Ruth’s attitude and belief had made her the nation-wide pop-culture icon. Merchandise of Ginsburg with a crowned head and title “Notorious RGB” – became the “It” of American society. Her “dissent collar” that she would wear on her court days made her fashionista. The Notorious RBG turned into blogs, writings, fashion, merchandise, documentary, movie and pop culture itself.

As per National Public Radio (NPR), in her last days, Ruth told her granddaughter “My most fervent wish is that I will not be replaced until a new president is installed.” Her death leading to a vacancy in US court may change the course of the upcoming presidential election. Heeding to this, US President hours ago promised to put female nominee name within a week. It has infuriated the Democrats on the account that Senate Republicans stopped Democratic President Barack Obama’s choice for the US top court in 2016. Americans want her to wish to be fulfilled.

A woman, a mother and a Jew – the three strikes that turned her down also moulded her into the biggest inspiration in American and international history. Her legacy lies in every person who wants to better the world through legitimate means for “one’s life is not just for oneself but for one’s community” said Ruth Bader Ginsburg.