Bombay, for all its generosity and effulgence, has also been a  city bathed with numerous surprises. Being the great metropolis that it is, one never misses to find a unique aspect, a piece of novelty here. I nearly passed out with excitement and delight when I visited Khotachiwadi – a place which is an entirely different world in itself, a place which now has my heart. Tucked away in Girgaum at the end of Jagannath Shankarshet road is a quaint little hamlet which is one of the finest representations of the history, lifestyle and cultural structure of ancient Mumbai. A Portuguese-style house in Khotachiwadi

This Goathan (village) was founded by Khot, who belonged to one of the Pathare Prabhu (Hindu Brahmin) families, who eventually sold off plots of this particular land to many East Indian Christians. Hence originally, Khotachiwadi was home to two communities – Maharashtrian and Christian which were then followed by many others like Goans, Marwaris, Gujaratis, Sindhis etc. It is a poised and collected settlement with beautiful winding lanes decorated with 150-200 years old bovine buildings and houses. The bungalows proudly reflect the ancient Portuguese architecture of great heart and detail. Here, every lane, every alley, and every shrine has a story to tell. The buildings of Khotachiwadi were built in the late 19th or early 20th century which were originally inhabited by the East Indian Christians and the Pathare Prabhus. Each house here displays a modest dimension to its architecture which again, is a great example of Indian craftsmanship during the British Raj. Single storey cottages richly colored in red, yellow and green, sloping tiled roofs and wooden spiral staircases along with high-raised ceilings, serene verandahs and front porches, brightly painted doors and windows and tapering lanes of never-ending beauty – Khotachiwadi has, without a doubt, stood the test of time and pleased hearts of millions across countries. Together, all these vivid elements radiate the charm of Konkan-Portuguese architecture. The streets are one of the strong elements of the village. To wander into the interiors of Khotachiwadi is to witness a little world – content in itself. It is no surprise how widely it’s being called ‘Mini Goa’. Right at the entrance of Khotachiwadi is the Girgaum Catholic Club, founded in 1894, which is a hub for vivid festivals, gatherings, and events. While proceeding on my tour of the village, I was pleasantly interrupted by a man who was mildly strumming happy tunes on his guitar while singing joyfully in his house. My further introspection led to interaction with him, was when I found myself at the receiving end of facts earlier unknown to me. Wilfred Felizardo, a native from Goa, stays in no. 57 Khotachiwadi. He is largely known ‘Willy Black’ by his resident friends and family. Willy’s 120 years old house is not merely a house but a piece of art. 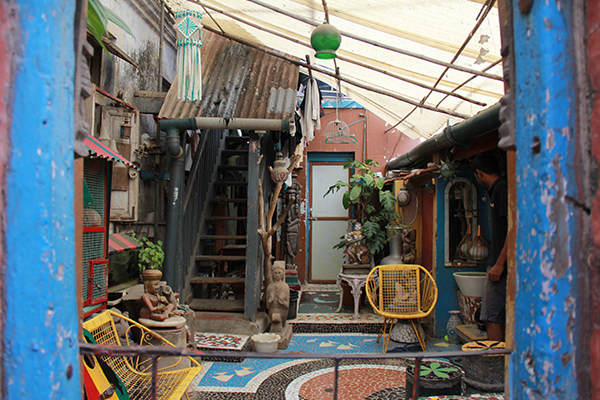 Largely laden with heritage artifacts, ancient wooden pieces, lamps, lanterns, luminous chandeliers and more, it only goes to show how big of an arts and crafts enthusiast Willy is. “Enjoy life as it is, because Zindagi na Milegi Dobaara”, says Willy with a lyrical smile on his face. He is your ideal happy-go-lucky man, fully living life, not missing out on its beauty. But every beauty has its share of shortcomings, so does Khotachiwadi. Like every other old structure, the wood works and other aspects of the village have to be extremely taken care of and protected by insects and various other elements of nature. “A lot of changes and alterations have been made in the past few years. Construction, honkings, nuisance, and disturbances have started coming in the picture which in turn led to a  number of Catholics moving out and flying to The States, Middle East, Australia and New Zealand for better opportunities” says Willy. One of the by lanes of Khotachiwadi. Photo Courtesy -Ethel Misquitta

Although being sad over the fact of his fellow residents moving out and the number of alterations being made, Willy never fails to do his  best bit to keep alive the tradition and spirit of his lovely land. He teaches and plays music to the kids especially during Christmas and other such functions. Moving further, I came across the house of James Ferreira (No. 47G)  – a life-long resident and a much-celebrated fashion designer. I would like to stop for a moment to purely appreciate his excellence in taste and designing skills. James’s 200 years old house is an epitome of rich Portugal heritage and gorgeous relaxed vibe. “All these are colonial artifacts which I have been collecting since over fifty years,” remarked James. He is also an active member of the workings of Khotachiwadi and stays deeply humbled with his majestic house. A Portugese style house in Khotachiwadi

Khotachiwadi hence has become a prime example of cultural and social development and a bridge between western and traditional ideologies. Apart from this, a rather important factor which is prevalent here is the strong sense of unity amongst the distinct communities of the village. Bridget Misquitta is yet another resident of the settlement and a lady extravagantly warm in her manners. She says, “The most important feature of Khotachiwadi is the heritage homes and many such constructions. However, recently, it is nothing less than a task to maintain these houses. Taking care of them is becoming more and more difficult due to which a lot of houses are being sold and owners are increasingly moving out.” Inspite of all the inconvenience, residents of Khotachiwadi are always on the look out for getting together, says Bridget. “We get together during festivals, church service, for Christmas fairs and bazaars and many other events apart from these. People are always found by your side, come what may. You are never alone in Khotachiwadi,” says Bridget, joyfully. From the city’s increasingly volatile blitz and glam to the rapid developments and hum-drums, there lies a village blissfully resting in its southern lap, challenging its own odds and sailing through rough waters to remain the work of heavenly wonder that it is. Khotachiwadi hence has been grandly inscribed in the hearts of folks which is a reason enough to believe that its spirit will live forever and beyond.