MEHFIL-E-LOCKDOWN – An Event by ABVP Unit of SBSE College

Is Centre Unfair? Plight Of Indian Migrant Workers Amid Lockdown

The show starts with the much-needed confrontation by Sansa to Lord Baelish. He tries to defend himself while failing miserably as Sansa takes down his attention to the horrors she faced, just because he decided to rescue her away from a family who killed her father only to land her with a family who killed her mother and brother. Apologies offered by him don’t work on Sansa, but while leaving he makes one last ditch effort to make amends by informing her of an army that her uncle has established in river run which might help her to conquer Winterfell.

At the noble house of black and white, Arya gets her first assignment to assassinate an actress whose life price has already been paid. She tries to understand why an innocent, not so guilty of life sins, a person has to be executed while a younger actress more guilty of life pleasures gets to stay alive. To which the god of many faces reprimands her by saying servants do not get to ask questions. Meanwhile, Bran learns a great deal when he goes warging with the three-eyed raven. Finally the existence of the white walkers and how they came upon existence is explained, the weird branchy looking folk known as the children of forest are responsible for creating them to help them ward of the humans that might come and make their living in the forest difficult. Though unlike what was expected they turned out be more powerful than the children of forest could have predicted.

At the iron islands the throning of a new king to rule them is taking place. Yara, the legitimate daughter of Balon greyjoy is defeated by her uncle Euron greyjoy for the position of the throne simply because he felt he was better since he has travelled the whole world and knows how it works and also because he is a ‘Man’. People of the iron islands decide to support him as they feel he some weight in his words and he knows what he is doing. As the ceremony of throning the king takes place, Yara with her brother Theon greyjoy run from the iron islands taking their best ships with them.

At the far end of the narrow sea, Daenerys targaryen commands Ser jorah to find a cure for his disease with tears in her eyes.

Meeren witnesses Lord Tyrion making an unlikely ally, who is none other than one of the red priestesses of the Lord of light, who promises to help them, stating Daenerys is the true ruler and the Lord of light chose her to rule.

The people staying on the wall, plan to take back winterfell with the aid of Sansa’s uncle and all the houses of winterfell that have yet to join Ramsay boltons side. 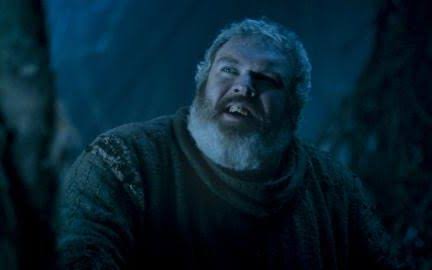 It is when Bran decides to go warging alone is the time when the world around him falls apart. His curoisity lands him in front of the night’s king who recognizes him and make a grab for him. Bran suddenly wakes up but the the touch that the white walker inflicted upon him still lingers, which is also the gateway for them to find him and finish him.Meera along with hodor and a child of the forest drag him out to the snow where he wargs hodor to ‘hold the door’ that has all the white walkers banging against it. The child dies taking many with her, while the climax and probably the saddest scene in this season till now takes place when Bran realizes that while warging into HODOR, the only command left in him to remember was ‘hold the door’ which when repeatedly said sounds as hodor. So basically the mystery of the young and talking Wylis and how he could only say ‘hodor’ when old is explained. This scene is heart wrenching, as these scary white walkers are determined to kill Bran and whoever comes in their way, while hodor holds down the door with Bran’s voice echoing in his head to ‘hold the door’  to let Bran and Meera escape while he himself dies while protecting them.