Akshay Kumar is one of the versatile actors in the industry who can slip into action, suspense, comedy, drama, and thrills. He works like no actor among his peers can. He has been delivering thumping hits without a break and Bhumi Pednekar, on the other hand, was critically acclaimed for her performance in Dum Laga Ke Haisha. They are ready to bring something interesting for the audiences all over again in Narayan Singh’s Toilet- Ek Prem Katha. Actors Anupam Kher, Bhumi Pednekar and Akshay Kumar were in capital addressing a press conference, interacting and sharing the uniqueness of the movie.

When asked what made Akshay come on board for this film, he said “I didn’t research about it and nobody asked me to do it but the script was extremely different which was one of the reason to choose this film because we have never seen a film being made on toilet and that too a love story. Also, it’s a real life story and this topic is directly related to us and our health.” Akshay pointed out that it is not only a problem of rural areas but urban areas too face sanitation problems and it’s everybody’s (our) duty to keep the clean.

PM Narendra Modi’s Swachh Bharat Abhiyan started like a revolution in India whose one the objectives is to reduce or eliminate open defecation through the construction of individual and community toilets. Several ad campaigns and documentaries were telecasted regarding this cause and now this subject is making a big screen appearance. On asked about what makes him believe that this movie will make a difference and change the mind set of people, Akshay said, “I wanted this subject to be heard and creating a voice. I am sure that there will be a change in the way people look at this issue. And people are already changing because there are many women in rural areas who now refuse to get married if the house doesn’t have any toilet.”

He talked about how women have to walk miles in dark for defecating. “It’s sad to know that people still refuse to build a toilet in their house because the kitchen is there or Tulsi is planted in their house. But the government is really working on this issue as the % of Indians not owning a toilet has reduced from 54% to 34%” added Akshay.

To this Anupam Kher added, “This is not a movie on a subject that deals only with sanitation issues but also with women all over the world and Bhumi has been very courageous to work in it. This is a movement that should have been started earlier but now when we are dealing with such issues, I have great faith in youth that they’ll be the change.” 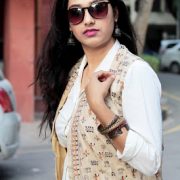