India was under control with their continued dominance in the Second Test of the four-match series on Day 1 at Sabina Park. They trailed by 70 runs with 9 wickets remaining in the 1st innings, as they first bowled out West Indies for 196 before India ended the Day 1 at 126/1.

From the time West Indies won the toss, they haven’t put a step right. Despite being aware of how weak their batting line up is, they choose to bat first when the pitch was to be at its most testing and next they batted without application. R Ashwin chewed them for breakfast with yet another fifer, registering his 18th five-wicket haul. It was the 2nd successive 5 wicket haul by Ashwin in successive innings, it seems like he is getting used to the condition. On the other hand it was refreshing to see a counter attack from Blackwood and Samuels, a contrasting double-act that had India worried, who put up a 81 crucial runs for the fourth wicket in the morning with Blackwood being the dominant partner, stroking seven fours and four sixes scoring a sizeable 62, Ashwin got Blackwood at the short mid-wicket caught out in a brilliant dive by the skipper Kohli, while Ishant kept pitching short to Samuels, and went for four fours in two overs, a pull, and three successive squares cuts. For perhaps the first time in the series, Indian bowlers were being seriously challenged.

But almost inevitably, the challenge was short-lived. Samuels launched R Ashwin for the sweetest six, and then, stepping out again failed to reach the pitch of a ball laden with topspin. Inside edge, caught at short leg, Back walked Samuels, out for 37.

While KL Rahul cracked an unbeaten 75 to guide India to 126/1. He has been a revelation who is turning out to be the next big thing in Indian Cricket, he brings a sense of reliability and balance at any position in the batting order he plays. R Ashwin nicknamed him as “batting machine” replaced with Murali Vijay who missed the Jamaica Test due to thumb fracture. He surely deserves a permanent place in the Test Squad as every time he got a chance has performed to his full potential. Amit Mishra & Mohammed Shami, on the other hand, doing the damage upfront giving a vital contribution to the team when required. Ishant Sharma struck twice on consecutive deliveries to leave West Indies at 4/2, giving a brilliant start with the ball and continued to prove his mettle. 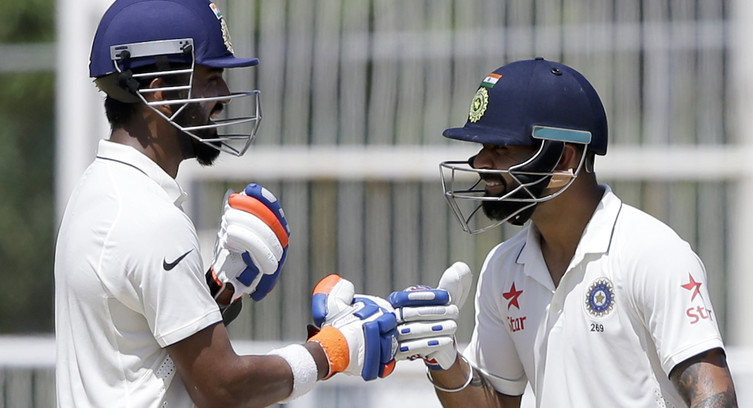 The Indian batting line-up, led by Opener KL Rahul showed a lot of composure hitting a career-best 158 as India reached a comfortable 358 for 5 on the Day 2 thereby taking complete control of the 2nd cricket Test against West Indies. Albeit at a rather slow scoring rate, KL Rahul set a record and became the second Indian player, after Mohammed Azharuddin, to convert his first three fifties into centuries.

In the morning, Rahul and Pujara played out a slow morning session, as India were trailing the hosts by just 11 runs at lunch. Starting at the overnight score of 126/1, the two batsmen looked to play for time. However, they didn’t have any help from the weather, as it was bright and sunny when play began, rendering this a good day to bat. The West Indies pacers didn’t make things easy for the Indian batsmen. Gabriel bowled an extended spell, as did Cummins and the two bowled a nagging line to trouble the duo at the crease.
The hosts managed to bounce back in the final session to dismiss both Rahul and in-form skipper Virat Kohli (out at 44), followed by the departure of the centurion from Antigua, R Ashwin, for a meager 3.

At stumps, India had consolidated their lead to a substantial 162 runs despite the fact of scoring only 232 in 88 overs bowled in the day as the visitors looked to grind the home team with an aim of out batting them.

Though the West Indians still have a long way to go in this Test before they can catch up with the Indians, especially after dishing out yet another below-par performance in their first innings.

Ajinkya Rahane looked confident during his unbeaten knock of 42 in company with Wriddhiman Saha (17*). Will Rahane and Saha put up a commanding partnership on Day 3 of the ongoing Test, and guide India to mark a score of 500? Optimistically looking forward to it.

India builds a considerable lead of 304 runs over the host side and declared their first innings on Day 3 after their slow play on Day 2, while the rain played it’s spoilt sport by overshadowing the visitors chances to win.

Ajinkya Rahane turned out to be the star on the 3rd Day’s play, scoring his seventh Test match century helping his team to a score of 500/9, after which the skipper declared. Rahane seems to in some real good form in the sport’s longest form.

Meanwhile, Roston Chase leads the Windies players off the field after a five-wicket haul in only his second Test match.

Rain brought a couple of interruptions, one being an early tea break followed by delayed West Indies start. It didn’t just stop completely, thus calling off the day’s play.

Without any slight chance of rain, India will be in a good position in the ongoing match, with an inevitable victory. However, the storm approaching Jamaica would get down the hopes of India’s victory.

All eyes on the rain as it will turn out be some real bad news for India if it continues to shower.

The Struggle : Profitability Vs Responsibility