The Nuclear Suppliers Group (NSG) is a group of nuclear supplying countries that seek to prevent nuclear proliferation by controlling the export of materials, equipment and technology that can be used to manufacture nuclear weapons. It was formed in 1974 after the Indian Nuclear Test and met in November 1975 for the first time.

In a series of meeting from 1975-1978, the NSG drew up guidelines relating to trade/export of nuclear equipment/technology. It currently has a membership of 48 countries.

India’s interest in becoming a part of the NSG first began with Manmohan Singh’s actions during his term, which he risked in spite of being aware of opposition by many. But unfortunately, due to strong opposition, it wasn’t much of a success. The USA always showed interest in having Nuclear deals with India and amended its law in order to accommodate civilian Nuclear trade with India. 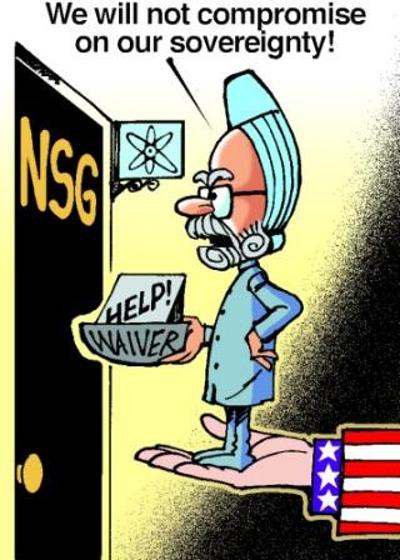 In 2008, a committee of the NSG paid a visit to India to assess the credibility and adherence to the Non-Proliferation Treaty in order to consider its membership into the NSG. Later that year, the USA proposed a draft to the NSG to offer a waiver to India from its guidelines so that civilian nuclear trade will be possible between India and other member nations.

Though the draft wasn’t passed and the first plenary meeting on it remained inconclusive, in r the second plenary later that year, NSG granted a “clean waiver” to India from its existing rules, which forbid nuclear trade with a country which has not signed the Nuclear Proliferation Treaty (NPT). Ahead of the plenary meeting in Seoul on 23rd June, Prime Minister Narendra Modi met Chinese President Xi Jinping and asked to make a fair and objective assessment of India’s bid. China remained firm on its stance that a non-signatory to the NPT should not be given membership and if India were to be granted membership, Pakistan should be given too. Unfortunately, the talks in Seoul remained un-conclusive, most of China’s objections remained invalid, the most primary one being India not being a signatory to the NPT, whereas in reality, there is a very minute connection between the two. The NPT is a treaty amongst countries to refrain from misuse of nuclear developments whereas the NSG is just a group of nuclear power, technology and equipment suppliers. In addition to the thin thread connecting the two, India has also been strictly adhering to NPT guidelines even if it is a non-signatory, thus, making it trustworthy by other members except China and its allies. The membership is crucial for India as it plans to expand its nuclear power generation significantly and enter the export market. Though the waiver granted in 2008 helped India to enter into an agreement with a lot of the member nations, a membership will just increase India’s credential, making it more appealing to investors, who would want to invest in the nuclear power expansion proposed. As a result of losing its bid, India has now strategically joined the MTCR, hoping that if it were to facilitate China’s green signal for becoming a part of MTCR, it would no longer stand in the way of India and NSG.

How long does it take to create an overnight success? - Pokémon Go App