On 23rd October, Shinzo Abe was re-elected as the Prime Minister of Japan as the Left Democratic Party (LDP) won the elections with a supreme majority. The victory extends Abe’s tenure in the office till 2021, the completion of which would establish Abe as the longest-serving prime minister of Japan.

The LDP and its allies won a staggering 312 seats out of a total 465 seats in Japan’s bicameral Parliament earning the right to make decisive constitutional amendments. Despite a dropping approval rating of the re-elected PM earlier this year, an unorganized opposition and a state of crisis strengthened LDP’s position among the Japanese population. It is being speculated that Abe’s first move will be directed towards enabling the country to defend and prepare for the threat imposed by neighbour North Korea’s Nuclearization.

Shinzo Abe’s victory comes as a blessing for the Indian Subcontinent as the relational ties between the two nations have strengthened since PM Modi and PM Abe seem to share a special partnership. Both ministers reflect the values of their respective nations as right-wing idealists and have established a foundation that will allow the two nations to complement each other strategically.

Japan became a part of the Malabar Naval Exercises in 2015 forming a trilateral partnership between India, Japan, and the USA to conduct joint military exercises every year.

In view of India’s strides in improving infrastructure, Japan has offered its ‘Shinkansen’ bullet-train technology and agreed to fund 80% of the total cost of the project at a mere interest rate of 0.1%. The Corridor planned to be constructed between Mumbai and Ahmedabad was inaugurated by the Japanese Prime Minister in September this year.

445-hectares of the area dedicated exclusively for Japanese Multinationals in Neemrana Industrial Zone is 90% occupied and is functioning smoothly with the special attention and arrangement provided by the Indian Government. An expansion of 200 hectares along with the development of a separate zone in Gujarat is in the pipeline.

The Civil-Nuclear Deal signed in November 2016 allows India to conduct nuclear commerce with American and French Nuclear firms, and to import technology and investment from Japan to construct Nuclear Power Plants, dispose Nuclear Waste and develop greener and cleaner energy sources. The Japanese Government has agreed to invest in six nuclear reactors within the country.

Japan and India have agreed to collaborate on the ‘Asia-Africa Growth Corridor (AAGC)’ by contributing $30 Billion and $10 Billion respectively to develop strategic infrastructure capacity to boost international trade and connectivity take on China’s Belt and Road Initiative (BRI) directly.

Japan has agreed to train 30,000 Indians in its Japan-India Institute for Manufacturing (JIM) in an effort to share Japanese Management Concepts, Cultures and Skills to boost India’s ambitious ‘Make in India’ and ‘Skill India’ campaigns. 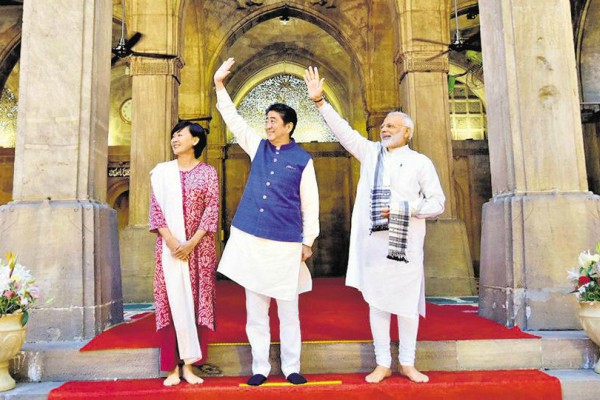 The Indo Japanese partnership has strengthened in the past few years due to the ‘expansionist’ approach of China that have bullied Asian Economies. China has consistently supported Pakistan and North Korea on international platforms, both of which have threatened India and Japan respectively. The Indo-Japanese partnership can take on China while complementing each other’s capabilities and provide a space for those Asian Economies that face similar pressures from the Asian Leader.

Japan is a capital-rich country that experiences high-standards of living and low unemployment rates while India is the emerging economy that needs foreign investment in infrastructure and economy to raise its standards of living. Playing in India gives Japan a platform to compete in growing markets and a reliable partner that depends on its skills and expertise while India obtains economic incentives that help curb unemployment, build infrastructure and accelerate growth within the economy.

Shinzo Abe’s re-election will allow the Modi-Abe partnership to continue batting against China’s fastballs that have consistently bullied them. As India and Japan work together, the potential to grow increases significantly and Prime minister Modi and Abe are at the epicenter of this alliance.

Into The World Of Fatwas!

I'm a balanced 20-year-old that has ended up doing okay in all facets of life till now. I have a commerce based background, but I deeply follow global causes which are aimed at reducing Global Warming and slowing down Climate Change because I strongly believe in the severity of these causes. Let's just say that I've been inspired by the people who are doing good for the world and I just want to play my part in it by telling a story.