Heavy rains, floods and houses submerging in water. Time to move on from Bangalore rains to Assam floods. The natural habitat is dying and the villages have been submerged under the water. With over 19 lakh people relocated from their homes, the conditions only seem to be worsening by the day. Not only the people. The last report cited that at least over 31 were killed among the people in the 23 districts of Assam. 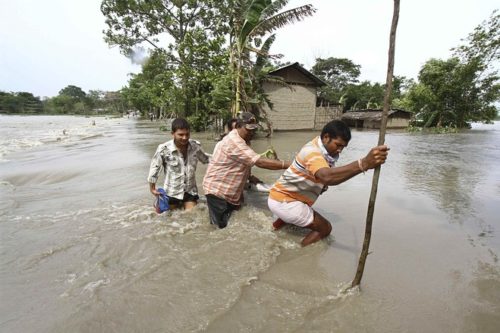 Morigaon was the most affected with nearly 3.5 lakh people hit, along with along Darang and Goalpara. Over 500 releif camps have been set up to provide shelter and supply food.

On the wildlife front, it is hard to digest the fact that the floods have affected the animals in such a way that they are close to becoming endangered. Over 50 deers have been in either drowned or poached when got a chance. Forest officials have reported 6 Rhinos to have drowned in Kaziranga National park and another one rhino dead in another national reserve in the state. Even the national animal is in a tragic state as they face a threat to their life from hunters who are taking advantage of the situation. At the Valmiki Tiger Reserve, 50 swimmers were employed by the forest department. They are helping with rescuing wildlife such as hog deer and barking deer and carrying them back to dry land. Nearly 400 forest guards are working with anti-poaching squads, tiger trackers and regular patrol teams.

RB Singh, field director of Valmiki Tiger Reserve is working on getting the animals out of the flood zone and guiding them to safer areas. The volunteers have found innovative ways by tying a cloth around the eyes of the animal so that it does not face much trauma.

Union Home Minister Rajnath Singh is visiting Assam to assess the flood situation in the state along with Chief Minister Sarbananda Sonowal and Minister of State in Prime Minister’s Office Jitendra Singh.

“The (Central) government will provide all assistance to the Assam government. I congratulate Assam Chief Minister and his state officers for arrangements in the flood-affected areas,” he added.

He also congratulated the National Disaster Response Force (NDRF) and the Army in providing relief to the flood-affected people.When posed a question by the media citing if he would call it a national calamity, the minister promptly responded stating that naming the situation is not a solution and that assessment of why the flood was allowed to occur and what can be done to avoid the situation is more important. The railways will provide free wagons for transportation of essential supplies to the affected districts of Assam as stated by railway minister Suresh Prabhu.

Flood warnings have been issued to Tamil Nadu where heavy rains in Karnataka have caused water to spill into the rivers and lakes in Krishnagiri and Salem districts.

The Iconic Parle G Factory Shuts Down In Mumbai

I am a biotechnology graduate,an animal lover and a foodie at her best! Inquisitive person by nature, talking a LOT comes to me naturally. I am a person who does not let silence dominate me in anyway and believe in letting the world know what you intend to tell them,which is a wonderful trait passed to me by my grandmother.