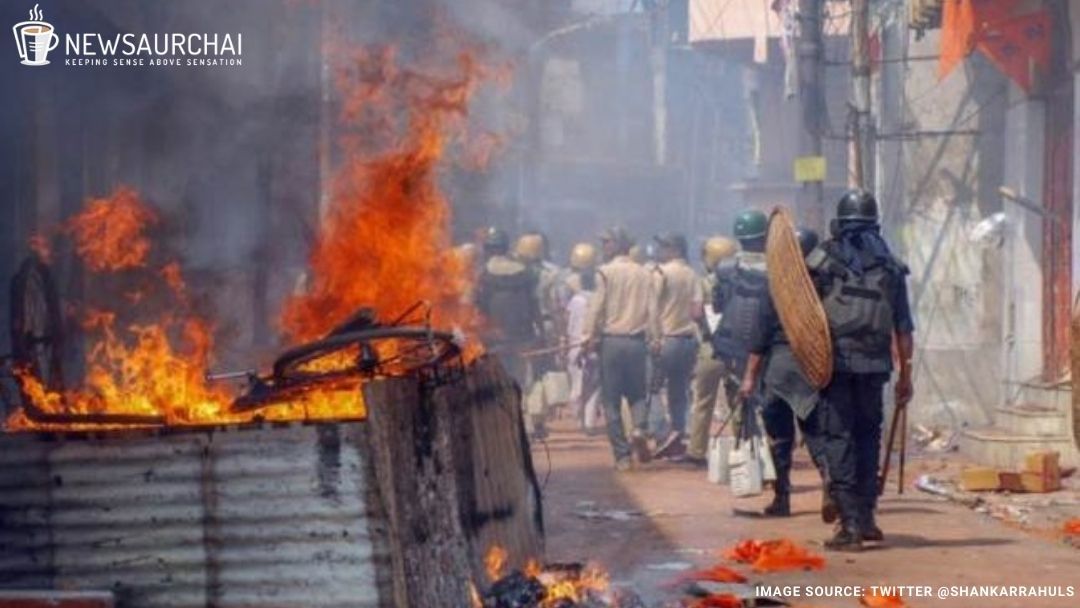 Palestinians were yet again faced with the horrors of arbitrary intimidation, and belligerent attacks by Israel in Gaza as its Air Force continued its unabated bombing campaign into the early hours of Friday morning. Several media houses reported airstrikes by the Israeli Air Force earlier Thursday, which targeted multiple landmark towers in Gaza, comprising several residential apartments and commercial and media offices. According to the Health Ministry in Gaza, the death toll has reached 109, including 28 children and 15 women, with over 621 estimated to have sustained injuries.

Meanwhile, Israeli forces on the ground continued to intimidate, provoke, threaten and inflict psychological trauma on Palestinians living in mixed neighbourhoods across the occupied West Bank, attacking their homes and businesses; confining them to unsafe spaces under the looming threat of an attack by armed Colonial Israeli Settler Mobs and Israeli ground forces. Emboldened by Israel’s Prime Minister, Benjamin Netanyahu’s green light to use “means with full powers”, several ground forces have seen traumatizing residents living in various parts of the occupied West Bank.

Ibrahim Souri was documenting Israeli police activity in Ajami, Jaffa last night. An officer told him to look away. "I'm filming, is that prohibited? You want to shoot, go ahead," he says. "You’ve been aiming at me for an hour. Shoot, it’s all documented."

Police then shot him. pic.twitter.com/87H3B2Yv9M

On Wednesday, Israeli news channel ‘Channel 11’ live telecasted a public lynching carried out by reportedly by a large group of Far-Right nationalists. As seen in the video, the group pulled the person, believed to be an Arab, from the car and viciously beat him up in the street amidst Israeli police presence. Videos posted on Twitter reflected the monstrosity of the Israeli forces, where they can be seen entering a Palestinian Family’s home in Haifa and assaulting them. Forces can also be seen apathetically throwing stun grenades in by-lanes within neighborhoods.

Watch these videos! All of them and spread them. This is the reality for #Palestinians living in the #Israeli settler colony. #Police storming into people’s homes and beating the shit out of them. #Save_Sheikh_Jarrah #acab 1/3 pic.twitter.com/eGYqrQNxCt

Instances of brutality brazenly carried out by Israeli Police, the IDF and colonial settlers are not isolated. The IDF and Israeli police have a decade-long history of sexualizing, assaulting, threatening, provoking, and scoffing at Palestinians living in occupied territories. Unlawful detentions, arbitrary confinement, rights violations, alienation, and the occupation of oppression, subjugation, and settler colonialism are psychological tactics highlighted within the Israeli administration’s notebook to curb the Palestinian resistance.

The malice currently on display by Israel escalated a week earlier when the Israeli Police stormed Al-Aqsa Mosque, located in East Jerusalem, brutally injuring and dismissing over 200 worshippers gathered to offer prayers during the holy month – by use of rubber pellets and Stun Grenades. Protests against the impending ruling by the Israeli High Court of Justice – initially to be given on Jerusalem Day – on the evictions of eight Palestinian families from the Sheikh Jarrah neighborhood in East Jerusalem for Israeli Colonial Settlers to move in have been met with excessive pushback by the Israeli Police. At the beginning of the month, the Israeli Police resorted to firing a stench liquid called ‘Skunk Water’ that hangs in the air, preventing demonstrators from gathering on the Sheikh Jarrah neighborhood’s streets.

Following the violence perpetrated by Israeli forces at the Al-Aqsa Mosque, Hamas, the militant group which rules Gaza, warned Israel of “consequences for the aggression”. On Monday, the soaring tensions resulted in Hamas launching rockets towards Israel, with Israel retaliating with their ongoing bombing and terrorism campaign against innocents in Gaza and the West Bank. Hamas launched a barrage of missiles towards Israel this week. While most of them were intercepted by Israel’s air defense system, the few that passed through caused the death of 7 Israelis. Among them was a 6-year-old child who was killed by a rocket attack.

Israel, in retaliation, leveled several parts of Gaza, targeting landmark towers and residential homes, some by issuing warnings to evacuate and others not, in their ongoing air bombing raids in Gaza. Earlier this week, they also claim to have targeted buildings housing Hamas operational facilities in Gaza and killed top commanders of the militant organization.

The never-ending stream of bone-shattering shelling throughout harrowing nights and into the early hours of the following day have forced many residents to abandon their homes, fearing an air attack by the Israeli Air Force. Over 2 million civilians live in Gaza city, where 41% are children under 14 years while 22% are between 18-29 years old. More than 70% of the population are refugees that have been dispossessed. Gaza, being home to over 2 million inhabitants ghettoized into a compact city, ruled by a militant organization and blocked by Air, Water, and Road, does not have a bomb shelter for the innocents. Many of those forced to move out of their homes have sought refuge in UN schools as the bombardment engulfs the city.

The northern #Gaza this Night.

Insert a line about the Nakba never having stopped here. https://t.co/qiXROCBKTk

Photo showing families from the northern village of Um al-Nasr walking on foot with what they can carry https://t.co/DRKYGdooRO pic.twitter.com/e5WQBoakH8

The belligerent Israeli offensive has desecrated livelihoods in an economy already trembling on its knees. In addition, Israeli settlers, armed to the tooth and backed by the insouciance of the Israeli Police, have threatened and vandalized Palestinian lives and livelihood in parts of the occupied West Bank. The escalation of Israel’s offensive comes on the eve of Eid-al-Fitr, as Muslims around the world celebrate the end of the holy month of Ramadan.

My cousin sent me this clip taken by a neighbor saying “we lived through this hell for almost half an hour. We are already dead”

As I’m posting this he updated “the bombing is back” pic.twitter.com/SozN0FZuQt

Unfettered shelling by the Israeli Air Force, throughout Thursday night into the early hours of Friday morning, saw several casualties in Gaza, amongst which a family was reported to be buried in rubble following an Israeli airstrike. A woman and her three children were said to have been killed by an airstrike adding to the death toll; medical services eventually retrieved their bodies after an ambulance was prevented from entering the northern part of Gaza due to the bombarding. Both the media and the medical services have not entered the city due to the constant airstrikes.

The scale of devastation in Beit Hanoun, in northern Gaza Strip from last night pic.twitter.com/t7izDzgGBy via @itamer83

Israeli Settlers continued targeting Palestinian homes in the occupied West Bank earlier today. Reports of a young boy being injured after being hit on the thigh by a stray bullet. In the early hours of Friday morning, protests erupted across the occupied West Bank, denouncing the Israeli operation in Gaza. The youth took to the streets, chanting, “Al-Aqsa is calling, Gaza is calling, Lydd is calling, o people of my country, unite.”

The Palestinian population in Israel, Gaza, and the occupied West Bank have long been subject to Zionists’ cruelty and heinous barbarianism, Israeli Defence Forces (IDF), Israeli Occupation Forces (IOF), armed colonial settlers and the Israeli Government, as a whole. ‘Nakba’, a term used by the Palestinians to refer to the events of 1948, wherein over 540 towns and villages were massacred, leaving millions of Palestinians internally displaced, owing to the formation of Israel, has made its way into popular discourse communicating that the ‘Nakba’ never ended and has been ongoing since the formation of Israel.

Disclaimer: The opinions expressed in this article are the personal opinions of the author. The facts and opinions appearing in the article do not reflect the views of NAC and NAC does not assume any responsibility or liability for the same.

All About India’s Covid Vaccination Plan